The other day I watched Free Solo, Alex Honnold’s movie, with a friend. It’s breathtaking and my palms were sweaty for 90% of the movie, definitely In the middle of the film is a scene where he starts the ascent but then bails out when he reaches the Freerider slab-pitch. Slab routes can be a bitch, and you have to be confident about your chosen path if you have a wet slab without many holds. To answer the question of down climbing, we split it into two parts:

No, I am pretty sure Alex Honnold could not have climbed back down THIS particular part of the wall. But he could probably have done it on Half-Dome or one of the upper pitches of Freerider. It’s just the lower slab part of Freerider which is weird to climb down. You’d have to be stupid or suicidal to try climbing it down without a rope.

Alex probably knew this, and as he was unsure about the pitch, he bailed out on the first ascent in autumn. He rappeled down with an ATC which he borrowed from the camera team – so he did not actually climb back down where he came from.

They didn’t show these scenes in the movie, but he talked about it in a Q&A..here he also states that they had a 1000 foot fixed rope and that’s what he used. He is also pretty open about the fact that hadn’t he had an ATC he would have gone hand by hand or french free climbed (use and pull bolts) down.

Pretty badass I thought when I saw it. I have downclimbed the one or other easy route, and it was always way scarier than climbing up, plus I felt super uneasy every time. Now imagine this without belaying and a rope – something Alex Honnold has reportedly done before on certain routes. This is  an actual video where he supposedly climbed back down a route.

So what if you cannot downclimb nor have a camera team? There’s only one option: Find a safe ledge and try to flag other climbers for help. This would probably have worked for El Capitan, but for other less frequented routes it could mean you will be stuck there for hours to days – without food and water unless you have a phone and call search and rescue services. So we mentioned the word downclimbing quite a few times now, what does it mean? Except for the obvious – that you’re climbing down instead of up.

Down climbing – a lost art?

Downclimbing used to be pretty normal, like 100 years ago, when most climbs where solos and people were forced to climb down afterward. Just have a look at some of the old photos of climbers in the Alps.

But since sports climbing and one pitch routes took off, most people stopped focusing and training downclimbing. Nowadays we all just climb lead, build an anchor, your buddies follow toprope or lead again, and when you’re done you rappel down or just lower (if you’re top-roping).

Why down climbing might be still good to learn

Navigating dangerous descents is good when you are able to down climb, even if you’re rappelling, as it can save you from injury.

It’s also good to practice it, as it trains you unexpected situations – some multi-pitch routes actually have sections where you need to traverse and/or down climb short sections. Just watch Alex Honnold’s movie again to see what I’m talking about.

You never know when you have to do it and trust me it feels VERY weird and is different from normal climbing. So, maybe take some time and practice it next time you’re on the wall.

How to down climb

Find your center of gravity

Prepare mentally by breathing right and having a quick checklist

Being prepared mentally is another important step when climbing down. You need this mindset as you’re in reverse gear now. Communicate with your buddy belaying you, stay positive but alert him. I like to have two things when I feel panic: A good deep breath, controlled in and out that is, and a checklist, something I learned by heart to focus on. It’s like a mantra. And usually, when you’re in a dicey situation, try to think how you got there, it will help you find your way down.

Go over these questions:

Technique of down climbing

Standing on your feet and your footwork is as important as on the way up. Most footholds will be easier to use, thanks to gravity and the fact that your weight will be shifted from the movement down. This means that some smears and little edges might now be good footholds, while they would not have worked when you were ascending.

Holds like leverages, laybacks and opposition holds can be all used when down climbing, and you make reverse high steps into low steps. Always keep in mind to achieve your neutral balance once you made a move. Down climbing is one move at a time, no hurry.

How to position your body

If you climb down, you need to keep in mind that there are two positions that use almost no energy.

One is the lockoff, where you have your hands placed on holds which are chin high, with elbows in. This position looks like if you just completed a chinup. The other position is the lockout position where you have straight, extended arms and weight distributed on every bone.

While you descend, try to stay in these positions as much as possible while you plan your next move. Sometimes you have to compromise, as the structure and geometry of the route leave you no other choice.

Generally, though, you should minimize time in half-cocked arms. To increase your line of sight, you can also lower yourself from a lockoff into a lockout when planning the next move and eyeballing possible holds. This will increase your range of sight. After you plan your move, you can then go back to lockoff, regroup and move to the hold from a neutral balance. It’s like a transition from balanced on feet to a lean and back to balanced.

Training makes perfect – also if you climb down

There’s nothing better than practical training. Go indoors, lead climb a route and instead of rappelling down, climb down. It’s great training to increase hand and eye coordination as well. You will be surprised by how often your eye, which is trained to climb up and judge distances when ascending, fools your brain and a foothold that looks miles away from up is actually just a short step away.

Trust your buddy and stay smart

Always have someone belaying you when you down climb. He or her needs to not only bring in the rope when you climb down but be extra cautious and alert in case you fall. In case you climb down do end the route, and you remove quickdraws and protection, definitely consider hanging to some of the quickdraws or make stops to rest up – you will need your physical and mental power!

And always keep in mind: Gear is replaceable. If you feel unsure, it’s better to spend 20$ on two new quickdraws, build an improvised top rope anchor and just top rope the down climb than to fall and get injured or even die. Beats paying hospital bills for sure!

Want to get better at technical sections? Make sure to read my guide on climbing endurance.

6 replies on “Could Alex Honnold have climbed back down to escape the route? A quick overview of the lost art of down climbing.”

How did alex get down

Down climbing is harder because in part you can’t easily see where you are going. When ascending it’s usually easy to see where the holds are for your hands and feet. While descending it’s hard and often you have to place your feet blindly. There are other difficulties in down climbing (e.g. your momentum is moving down and you have to stop it as you step down).

Most climbers free solo climbs that are easy for them. So it is possible to down climb. They may climb 100 feet of easy terrain, reach something that’s too hard to comfortably do, and down climb the easy 100 feet. Cutting edge free soloing close to your limit like Alex did is different. You must climb the route many times with a rope to know exactly what you need to do. Because there will be hard sections that will be dangerous or impossible to down climb.

I agree that most climbers should practice down climbing. They should also practice self rescue for a variety of situations, but unfortunately many don’t.

Thanks for the comment Steve, I totally agree with your statement that it’s often hard to see the holds. Been setting my feet blindly too!

Self-rescuing is a great skill and I’m trying to improve myself in this regard as well, would love to hear recommendations for some drills etc.!

The David Fasulo Self-Rescue book is excellent and goes over many scenarios you can practice.

Great explanation since no one else has been able to adequately describe down-climbing to my satisfaction! THANKS!

Thanks Jeanne, appreciate those kind words! 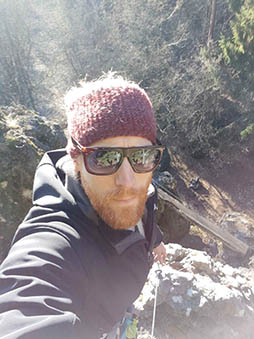 I’m Arne Hendricks and this is my place where i talk and write about climbing stuff. As an avid climber and family man i love to be outside and spend the day climbing, camping and having a good time.
You can find climbing, bouldering and mountaineering articles, gear reviews and buying guides on this site!